Those are the words spoken by Woody Harrelson as Larry Flynt as he explains to his future “Hustler” staff that no one buys Hugh Hefner’s magazine for the articles.

They aren’t the first words in Milos Forman’s ribald and rollicking film The People Vs. Larry Flynt from 1996, but they reveal the aesthetic of the infamous creator of Hustler Magazine, Larry Flynt. A close second would be “Shoot the girl!” In which Larry explains to a photographer that he, er, needs to shoot the girl.

All of the girl.

Coming out three years before Paul Thomas Anderson’s more celebrated exploration of pornography, Boogie Nights, The People was met with a significant amount of controversy. The main questions being the worthiness of the human subject and of course, the subject matter.

I once went to a screenplay signing by Larry Karaszewski (co-writer of the script with longtime writing partner Scott Alexander) who said, “we write biopics about people who don’t deserve biopics.” They had previously scribed Ed Wood and were following up The People with Forman’s Andy Kauffman film Man On The Moon. Most recently the duo was behind the symmetrically titled The People Vs. OJ Simpson.

It’s a funny line, and certainly delivered tongue-in-cheek, but in the literal sense, he could not have been more wrong.

Their sterling work was elevated by Forman’s typically brilliant and so very humane direction. The casting of Harrelson as Flynt could not have been more perfect (I still view it as his best work – no small statement, I know). Edward Norton as Flynt’s beleaguered barrister Alan Isaacman showed what a great actor he had already become. There were other clever choices as well.

James Cromwell plays Charles Keating. Crispin Glover lent his peculiar brand of peculiar to the part of a Hustler staffer named Arlo. There were cameos for James Carville and Flynt himself. In the role of Larry’s brother Jimmy, Woody’s own brother Brett was cast. He has rarely acted since but is terrific here.

The key to the film would be the casting of Flynt’s ill-fated muse, Althea. The choice of Courtney Love was a polarizing one. Aside from her caustic personality, the question of whether the rock star could act, or if the frequent abuser of illegal substances whose husband Kurt Cobain had recently committed suicide was in any shape to do so was much discussed by those who knew of the film. I imagine those within the production had questions as well. Forman was certain though. There were rumors that he and Harrelson put up money to insure her for the role.

Their faith in Love could not have been more successfully paid back in performance. While many slighted her work as simply playing a variation of herself (Althea had abused drugs and danced in strip clubs, just like Love), that criticism was weak, and perhaps more than that, simply lazy.

Love is a firecracker in the role. Wild. Eccentric. Sexy. Dirty. Tragic and hilarious. Often all in the same scene. She is not only Larry’s inspiration and support system. She is the nicotine stained beating heart of the film.

The thrust of the picture runs along two tracks. The first being the creation of Flynt’s more explicit answer to Playboy, Hustler Magazine, and the ongoing battles he would fight against governments both local and national over his first amendment right to publish his particular variety of, well, smut.

This culminates in a fabulous scene in front of the Supreme Court where Norton delivers the word-for-word transcript of Isaacson’s defense of the first amendment on behalf of Flynt and Hustler. It is marvelous and understated yet exhilarating. Even if the subject of the case is a cartoon depicting a drunken Jerry Falwell having “relations” with his own mother.

The court came back with a unanimous decision in Flynt’s favor. A historic marker for the freedom of speech and the artistic right to use parody as criticism.

The celebration of the victory is muted though. There is a hollowness in it. Flynt has lost so much by the time it is achieved. A would-be assassin’s bullet has stolen the use of his legs, and a dirty needle has taken his beloved Althea, an early victim of AIDS.

This is the second track. The love story between Flynt and Althea. Two iconoclasts. Well-matched in both world view and seediness. It’s as if they were invented for one another. The chemistry between Harrelson and Love is off all charts. They both have a certain off-kilter cock to their heads and a slight drag to their speech. Their work here reminds me of a line from the great Velvet Underground song written by Lou Reed, “I’ll be your mirror, reflect what you are.” Such is their symbiotic nature.

In some ways the film has a conventional arc. A man from poor upbringing falls in love, creates an empire off his own sweat and imagination, loses almost everything, then pulls out a – perhaps – too hard-won comeback at the end.

It’s just that this version is about a pornographer. A peddler of smut. One who just happened to strengthen the freedom of speech. Whether that was his original intent in life or not. And let’s just say it. It was not.

Flynt’s goal was to sell dirty magazines and get rich. Which he most certainly did.

Flynt grew up dirt poor. I don’t mean that figuratively either. He came from a long line of shine runners in Kentucky – something this writer can relate to. His is the ultimate rags to selling rags to riches story. He lead a unique and most significant American life. Something no one would have predicted.

The People Vs. Larry Flynt perfectly captured this life. It garnered strong reviews upon its release. Five Golden Globe nominations followed. Then two Oscar nods for Forman’s direction and Harrelson’s lead performance. The Academy shamefully overlooked both Love, as well as Karaszewski and Alexander’s superior screenplay. It’s been over twenty years and I’m still pissed about that.

No one was more raw and electric than Love that year. No screenplay better managed the balance between comedy (it must be said; the film is often uproarious) and tragedy than The People Vs. Larry Flynt.

It was the best film of 1996 and one of the finest of the decade. It didn’t make much money and I feel like many have forgotten the handful of awards it was considered for. I hope they have not forgotten its quality and significance.

We lost Milos Forman earlier this year. He was a grand master in his profession. When the roll of his best films is called, it often begins with either One Flew Over The Cuckoo’s Nest or Amadeus. Classics both.

But this film. A somewhat dirty movie about a very dirty man is my personal favorite. The story of Larry and Althea deserves to be mentioned along with R.P. McMurphy and his gang misfits, as well as the tale of Mozart and Salieri.

Not bad for a biopic about a man who didn’t deserve a biopic. 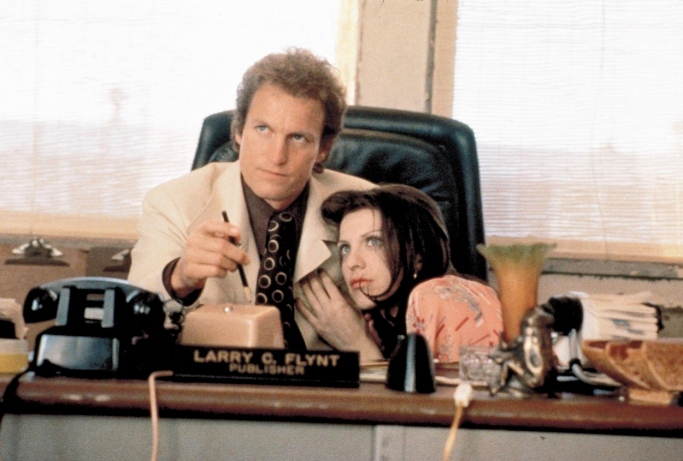