It must have seemed so obvious in the summer of 2002. Put Tom Cruise and Steven Spielberg together in a sci-fi/action film and then just wait for the Brinks trucks to roll up and dump money all over 20th Century Fox’s lawn. While you would be hard-pressed to call Minority Report a financial failure (it did make over $350 million worldwide) that caravan of trucks never quite arrived.

Even now, nearly twenty years later, the reason why Minority Report wasn’t more successful remains elusive. Cruise was (and maybe still is) the biggest movie star on the planet, and Spielberg practically invented the blockbuster way back in 1976 with Jaws. Minority Report would pair these two box office titans on the same project for the first time.

I suppose if Minority Report had been a bad (or even mediocre) film, the explanation for the relatively modest box office returns would have been understandable. But that’s simply not the case. Minority Report is an A grade piece of speculative fiction that delivers like gangbusters in all respects.

One would assume the production values and action sequences would be top of the line in a Spielberg film, and one would certainly be correct. There is a flying jet pack sequence in the first half of the movie that delivers all the slam-bang thrills you could ask for as Cruise desperately attempts to escape capture by his own police force.

There’s also a lot of Tom Cruise running in the film. In fact, in pretty short order, Minority Report becomes a chase film. And does anyone run onscreen like Tom Cruise? If you’re wondering, that question is indeed rhetorical.

It’s not just that the film plays well as an action thriller either—this is a movie with real deep shit on its mind. Based upon a Philip K. Dick short story of the same name, and taking place in Washington DC in the relatively near future of 2054, Minority Report asks some very serious questions about privacy in general, as well as  the use of technology and predictive indicators as they relate to policing.

Prince recorded a song called Electric Chair back in 1989, buried deep on the Batman soundtrack, that touched on the same theme that Minority Report fleshes out in full.

“If a man is considered guilty

For what goes on in his mind

Then give me the electric chair

For all my future crimes”

With the help of what are known as precogs (two men and one woman who are essentially enslaved, suspended in a pool of milk for the “greater good”), John Anderton’s (Cruise) experimental pre-crime force downloads the trio’s visions of future crimes and arrests the offender before they have committed the offense. While the results in the DC area are undeniable (the “actual” crime rate drops to minuscule levels), the moral and ethical questions are more than a little troubling.

How do you know that the pre-cogs’ visions are correct? Is there no possibility that the person about to commit the murder might not go through with it at the last second? And should you jail someone for something they almost did or only thought about doing? And when I say “jail,” I’m really underselling it. The near perpetrators of heinous offenses are placed in what amounts to pods with a sort of crown affixed to their heads that places them in a coma-like state.

These are not questions John Anderton asks of himself. He is a true believer. That is, until one day, the pre-cogs have a vision of an upcoming murder while Anderton is on duty. Anderton goes to the virtual screen to download the pre-cogs’ foresight and he finds his next target is… himself.

Believing he would never commit murder, Anderton runs. The remainder of the film is him trying to prove his future innocence while coming to terms with his own darkness. You see, Anderton’s commitment to pre-crime is very personal.

Not long before the existence of pre-crime, Anderton’s son was abducted from a public pool while under his care. Anderton’s obsessive commitment to pre-crime isn’t just based only on his belief that the world would be a better place if crimes could be stopped before they are committed, it is also his penance for not protecting his son.

Still, Anderton’s work on the force cannot fill the hole left by the loss of his son and the subsequent disintegration of his marriage. To manage his grief, he also turns to drugs. On a nightly basis, Anderton will return home, play back memories of his life with his wife and son, snort a mind-altering substance, and zone out for the evening. 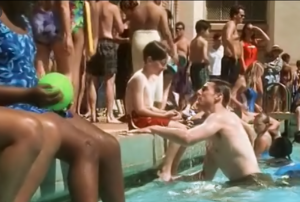 It’s often been said that Cruise is a cold actor. I don’t entirely disagree—there is something about his steely-eyed resolve and the single-mindedness of his characters that can come off as chilly. While that quality (or defect, depending on how you see it) is in effect here, there are multiple grace notes that Cruise touches on outside of his typical core acting style that make this one of his very best performances. In particular, the scene at the pool where his son goes missing.

It’s an altogether brief sequence, but in it, Cruise lights up with a warmth and sweetness that we rarely see him display onscreen. There’s a playfulness between him and the boy that feels every bit as genuine as Cruise’s acts of derring do that are his stock and trade. He doesn’t do it all that often, but when paired with a child on film (see Jerry Maguire and The War of the Worlds for other examples) Cruise is at his most human and relatable. And here, in this film, that brief poolside interlude, which goes from cheerful to tragic in short order, provides the depth and meaning to Anderton’s guilt, drive, and ultimately, his redemption.

As you might be thinking Minority Report is both headier and tougher than most of Spielberg’s films—especially among those that aim to make the box office turnstiles whip like windmills during tornado season. It’s worth remembering that just one year earlier, Spielberg directed AI, a film that Stanley Kubrick intended to make. That film doesn’t quite work because, as much as Spielberg admired Kubrick, their sensibilities simply don’t line up. Spielberg is at heart, a sentimentalist. No one would ever accuse Kubrick of such.

Which is why I find it so ironic that Minority Report feels like a film that does blend Spielberg and Kubrick’s sensibilities so well. In AI, it felt like Spielberg was trying to direct a Kubrick film as Stanley would have. Whereas here, with Minority Report, Spielberg is being influenced by Kubrick’s darker vision of humanity, while also making his own film. It is a perfect melding of two distinct and (seemingly) mutually exclusive styles of filmmaking. Minority Report both entertains and challenges in ways that honor both Spielberg, and (whether intentional or not) the man he tried (perhaps a little too hard) to pay tribute to just one year before.

Seeing Minority Report almost two decades after its release, it’s quite eye-opening to see how prescient it was. From advances that we are currently on the cusp of having, like driverless cars, to those already in place, like marketing algorithms that recognize you and your interests, and more insidiously, the desire to police thoughts as opposed to actions, Minority Report feels so like so much more than just the summer blockbuster it was intended to be once upon a time.

Now, viewed through the prism of the modern times we live in, Minority Report isn’t simply high-level entertainment. In its depiction of a society that is over-convenienced, that chooses security over freedom, and disconnection over connection, the “report” feels all too familiar. Perhaps the film served as a warning. One that we did not recognize at the time and may already be too late to heed.