That’s how extensive the career of Cloris Leachman was. It is such an extraordinary length of time that I feel it bears repeating.

Born in 1926 in the middle of middle America, Des Moines, Iowa, Leachman’s first appearance on film was in 1947’s Carnegie Hall as an uncredited “dancing nightclub patron.” A long run of television appearances (mostly in single episodes) followed before Leachman scored a small part in Robert Aldrich’s 1955 noir classic, Kiss Me Deadly.

Over the next 14 years, Leachman would continue to work steadily on television and in the occasional film, before having a bit of a breakthrough in 1969 with the George Roy Hill classic, Butch Cassidy and the Sundance Kid. While her role as Agnes wasn’t long in screen time, the film’s massive success gained her notice.

Just two years later, she would be cast in The Last Picture Show by director Peter Bogdanovich in the role of her life, as the middle-aged housewife, Ruth Popper, who has an affair with a high school student named Sonny played by Timothy Bottoms. Ruth’s husband is a closeted coach at the high school and his inattention is at the core of Ruth’s loneliness. The Last Picture Show is an impossibly sad movie about a dying small town in the southwest, and no character in the film conveys that sadness the way Cloris Leachman does with her heartbreakingly hopeless eyes. In life there are two kinds of lonely: lonely and alone, and lonely and with someone. Of the two, I would argue the latter is the worst. Ruth is essentially a widow with a living husband. There are times in The Last Picture Show where I find it hard to even look at Leachman. There is just so much hurt on display.

Perhaps the Academy saw that too, as they awarded Leachman the Oscar in the category of best supporting actress for that year. 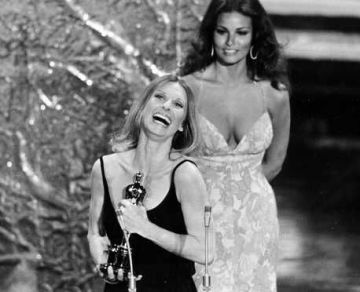 Leachman’s triumph didn’t springboard her to a huge career on film. While she would on occasion find success on the sliver screen (particularly in Dillinger from 1973, and in her howlingly hilarious performance as Frau Blucher in Mel Brooks’ Young Frankenstein the next year), television is where she would leave her greatest mark over her final 40 plus years as an actor.

While Leachman never got another series of her own after Phyllis ended in 1977, her work as a guest or recurring character in a number of variety shows, TV films, and series resulted in a total of 22 Emmy nominations and eight wins. If you ever want to stump your friends in TV trivia, ask them the name of the actress tied with Julia Louis-Dreyfus for the most Emmy wins of all-time. However improbable, the answer to that question is Cloris Leachman.

But what I think I admire most about her career is that which is most simple and obvious—the longevity of it. Through parts large and small, projects mighty and malnourished, she was a relentless actor whose work ethic is nearly unmatched and her acclaim underreported.